What is ovulation? Ovulation Meaning in Hindi

In order to know when to try for pregnancy, it is necessary that you know your ovulation period. Ovulation is the phase of a woman’s menstrual cycle when an egg (ovum) is released from the ovary, ready to meet sperm. Generally, a woman’s period comes after 28 days, so according to that, the period from 12th day to 16th day after the end of menstruation or period is considered the best time for a woman to conceive. If you have sex during this time then your chances of pregnancy are highest. But if your periods are not regular then it can be a bit difficult to find your ovulation period. Let us know what is this whole process- 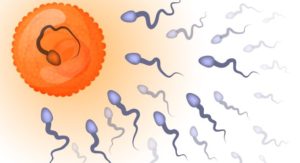 The process of ovulation usually occurs once every menstrual cycle when hormones trigger the ovaries to release an egg. You can get pregnant only if a sperm fertilizes the egg. Ovulation usually occurs on the 12th to 16th day after the start of your menstrual period. Eggs are in your ovaries. According to science, when a girl child is born, there are about 20 million eggs in her ovary at that time, of which about 500,000 are saved by the time your periods begin. During the first part of each menstrual cycle, an egg develops and matures. As your ovulation period approaches, your body produces a hormone called estrogen, which thickens the lining of your uterus and helps create a favorable environment for sperm. These high estrogen levels trigger a sudden increase in another hormone called luteinizing hormone (LH). The surge in ‘LH’ causes the release of a mature egg from the ovary – which is called ovulation. Normally, ovulation occurs 24 to 36 hours after the LH surge, which is why an LH surge indicates a higher chance of fertility. The egg can be fertilized only up to 24 hours after ovulation. If it doesn’t fertilize, it attaches itself to the lining of the uterus (the egg is lost with it) and your period begins. Which marks the beginning of the next menstruation/periods.

During the process of ovulation, our body gives us various signals, which are enough to tell that our ovulation period has arrived. It is just necessary to recognize these signs and symptoms (Ovulation Symptoms in Hindi). Let us know what are those symptoms

As a woman approaches ovulation, her body produces increasing amounts of a hormone called estrogen, which causes the lining of her uterus/womb to thicken and make it a more favorable environment for sperm to live in. helps. These high estrogen levels trigger a sudden increase in another hormone called the luteinizing hormone (LH). This LH surge causes the release of a mature egg from her ovary – this is ovulation. Ovulation normally occurs 24 to 48 hours after the LH surge, which is why the LH surge is a good predictor of peak fertility.

A woman’s body temperature rises by 0.4 to 1.0 °C after ovulation. This rise is usually too small to be noticeable, but can be detected by an accurate thermometer.

About one in five women have pain around the time of ovulation. The pain can occur before, during or after ovulation. There are many reasons for this ovulation pain-

It may happen that one month the ovulation pain is on one side and the next month on the other side or even on the same side every time. It usually lasts only a few minutes, but can last longer, possibly 24 to 48 hours, and may be accompanied by sharp cramping, or characteristic pain. It is rarely described as severe pain.

During a woman’s period, the type and amount of cervical mucus (a secretion made by glands in the cervix) changes. It may be sticky or stretchy, white or cloudy. In the days leading up to ovulation it turns clear and stretchy (and is often compared to egg white, hence the name – ‘egg white cervical mucus’). This mucus is helpful to the sperm and helps the sperm to reach the egg.

Speaking of ovulation signs, your body gives several signs of increased fertility as ovulation approaches. The desire to have sex becomes stronger before ovulating. A woman’s libido increases at this time. If you’ve ever wondered why your desire for sex waxes and wanes throughout the month, this is one big reason.

Also, age plays a large role in determining female fertility, with older women being less fertile than younger women. Having an ideal body weight, eating a nutritious and well-balanced diet, adopting lifestyle changes and having sex during the fertilization period can increase the chances of conception.

Read More: Learn How To Get Pregnant

Ovulation Meaning in Hindi; There are also some factors that affect fertility such as obesity, health of the couple, stress etc. So for pregnancy it is necessary that the couple should be healthy and there should not be any kind of stress. If you understand the symptoms and signs between 12th to 16th day, then you can easily know about your ovulation period and can easily get pregnant by having sex at that time. Huh. Here it is very important to keep in mind whether your periods come at an interval of 28 to 35 days or not. Consult your doctor if your periods are erratic.

To Select a Gynaecologist, Click Here To Chat With A Credihealth Medical Expert For Free –

Know what is the meaning, symptoms and treatment of appendix