There are many viruses spread in the environment around us, which can prove to be very harmful for our health. If we talk about infections and diseases that spread through the air, common flu is the most common, as well as chicken pox, measles, mumps, etc., are also very dangerous. In this article, we will tell about Measles which is also known as Khasra (Measles Meaning in Hindi).

There was a time when the measles virus was eradicated but due to the rise of the anti-vaccine movement, measles has spread quickly and easily. Now it has spread in many countries of the world, which is especially fatal for small children and children up to the age of 15 years. Let us know the meaning of Measles, causes, symptoms and how to treat it.

Measles is a highly virulent disease that can spread rapidly, caused by viruses of the Paramyxovirus family through direct contact or through respiratory droplets from an infected person’s cough or sneeze. It infects the respiratory tract and then the rest of the body with symptoms appearing 10-12 days after infection. These include high fever, rash, cough, runny nose, and red and watery eyes. It can cause complications such as blindness, encephalitis, severe diarrhea or diarrhea, and severe respiratory infections, including pneumonia. If the patient’s immune system is weak, then the death of the patient can also occur due to measles. The risk of this disease is highest in children under 5 years of age. However, it only affects humans and not animals.

Once exposed to measles, that person acquires immunity to measles for the rest of his life. The chances of getting measles again in that person’s life are almost nil.

Rubella or German measles is also a contagious but slightly less viral disease that affects children and young adults. Symptoms include rash, mild fever, nausea and conjunctivitis. Rubella itself is not a high-risk infection, but measles rubella infection during pregnancy can pose a serious risk to the fetus because in 90% of cases, the virus is transmitted to the fetus. This can result in miscarriage, or congenital rubella syndrome (CRS) in the baby. CRS can cause deafness, disability, heart defects, autism, and other birth defects in the baby. According to WHO, about 40,000 babies are born with birth defects due to CRS every year in India. 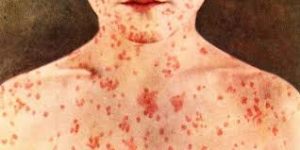 There is often fever in this. It can range from mild to severe as high as 40.6 degree centigrade. It can also last for several days, and it can be more or less when the rash appears.

Most childhood rashes are not measles, but a child should still see a doctor if:

There are mainly 2 types of Measles, which are as follows-

Measles: This is the standard form of measles, caused by the rubella virus.

Rubella, or German measles: It is caused by the rubella virus. It is not usually fatal, but it can be more dangerous to unborn babies than to young children if a woman is exposed to the virus while she is pregnant.

It is neither contagious nor as serious as standard measles.

Measles or measles is caused by infection with the rubella virus. The virus lives in the mucus in the nose and throat of an infected child or adult. The disease is most contagious about 4 days before the rash appears, and remains contagious for about 4 to 5 days.

This infection spreads through:

There is no specific treatment for measles. If there are no complications, the doctor will recommend rest and plenty of fluids to prevent dehydration. Its symptoms usually go away within 7 to 10 days.

Apart from this, the following remedies can help in its treatment:

People who have had measles once in their lifetime usually become immune to it, and they do not get it again. People who are not immune to it should consider getting the measles vaccine.

What to eat in Measles?

Its side effects can be prevented by following a healthy diet in Measles. During the acute phase, following a fruit diet will provide essential nutrients. In the convalescence phase, when the patient’s temperature reaches a normal level, eat healthy foods. Include drinking about 8 glasses of water in measles diet, along with other fluids like lemon juice water, barley juice, orange juice, coconut water. Apart from this, include the following diet-