Blood Cancer, as its name suggests, is a blood-related cancer or to say that this type of cancer directly affects your blood, bone marrow and lymphatic system.

What Is Blood Cancer In Hindi – What is blood cancer?

As its name suggests, this type of cancer affects the production and function of your blood cells. Blood cancer begins in the bone marrow, which is an integral source of blood production. Stem cells in your bone marrow mature and develop into three types of blood cells: red blood cells, white blood cells, or platelets.

In case of cancer, the blood production process gets disturbed due to the growth of abnormal type of blood cells. Blood cancer or blood cancer can happen to people of any age. The risk of getting this disease is more for people aged 30 years or more.

On the basis of metastasis, blood cancer is divided into stages. These stages can be determined according to the symptoms and rate of blood cancer. Metastasis occurs when cancer spreads from one organ to another that is not directly connected to it.

There are mainly 4 stages of cancer, they are as follows:

Blood cancer is caused by a disturbance in our DNA. Usually these changes in our DNA are caused by reasons we don’t understand and are linked to things we can’t control. In most cases, we do not understand what causes the changes in DNA that can lead to blood cancer, research has shown that there are many things that contribute to the development of certain types of blood cancer. Some of them are given below – 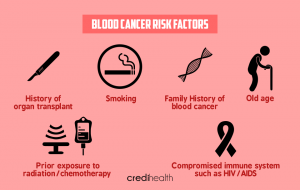 Causes of blood cancer vary depending on the type, such as myeloma affects only adults, while lymphoma usually develops in people aged 15-25 or above 50 years, and people who have previously They have problems with their immune system since then.

The symptoms of blood cancer are given below in detail, let us know about it. 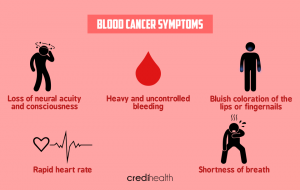 Apart from this, its symptoms can be identified on the basis of all three types, they are as follows-

Blood cells are made in our bone marrow and this is where leukemia starts. In leukemia, white blood cells are produced in excessive amounts in our body which are not controlled and these cells live longer than their lifetime period, apart from this, these cells also do not help your body to fight against infection. Some of the symptoms of leukemia are as follows:

Anemia: Anemia occurs when your body does not make enough red blood cells. Its main symptoms are as follows:

Absence of clotting: Platelet cells are helpful in blood clotting. When the blood doesn’t clot properly, even a small cut can bleed profusely, along with it, nosebleeds can also be common. Apart from this, some other symptoms are as follows:

Other symptoms: In Leukemia, the White Blood Cells (WBC) are unable to fight the diseases, due to which the patient becomes sick more often and takes longer than usual to recover. Apart from this, along with fever, sweating at night can also be common. Cancer cells spread to the lymph nodes, liver and tonsils and can cause swelling in them. Apart from this, your weight loss, loss of appetite can be common problems.

Swelling of the lymph nodes is the main symptom of lymphoma. Apart from this, a lump is formed in the patient’s neck, armpit, or groin. Other symptoms include cough, shortness of breath, pain in the chest, abdomen and bones. The patient’s spleen may be enlarged, due to which the stomach becomes bloated. Swollen lymph nodes are usually painless, but drinking alcohol can make them painful.

Apart from this, some other symptoms of lymphoma are as follows-

In our blood, plasma cells are disease-fighting cells, but myeloma causes plasma cells to build up in your bone marrow out of control and prevent healthy blood cells from forming. Its symptoms (Blood Cancer Symptoms in Hindi) are usually not visible until you notice it.
bone pain Bone pain is the most common, severe, and long-lasting symptom of myeloma, usually accompanied by pain in your back or ribs. Cancer cells release a chemical that stops the normal growth of your bones. It makes your bones thin and weak.

Hypercalcemia : Calcium levels increase in myeloma. This can cause the following problems:

As soon as these symptoms of blood cancer appear, the doctor should be seen immediately.

Also read in detail about: HIV Symptoms in Men

Although blood cancer is a deadly disease, if it is detected at the right time, it can be prevented from spreading and it can be cured by getting treatment. There are blood cancer healing centers in our country India at Delhi, Hyderabad, Kolkata, Mumbai, Bangalore, Ahmedabad, Chandigarh, Indore, apart from this you can also use the treatments given below. Let us know how blood cancer can be treated and what precautions can be taken to cure blood cancer:

The treatment of blood cancer depends on its types, your age, and how fast the cancer grows, in which parts of your body the cancer has spread. Some of the common treatments and remedies for blood cancer are as follows:

Also read about this in detail: Breast Cancer Symptoms in Hindi

Book an appointment with an oncologist near you

What is uric acid, symptoms of its increase, and the right treatment

What is Hepatitis B - Symptoms, Prevention and Correct Treatment